Are we  alone in the universe? What’s lurking under Trump’s wig? Is Shia LaBoeuf insane or just trolling us? These are legitimate life questions. One question, however, that I just don’t understand, is why more people don’t watch It’s Always Sunny in Philadelphia? Carol Vorderman herself could not answer this conundrum.

This blog is for any of those annoying on-the-fencers, anyone who thinks the show is “not their bag,” and for anyone who needs to send a would-be fan some much-needed literature. I’ll try not to include any big spoilers but it’s going to be a struggle so bear with me. Or just do us all a favour and go and watch it…

It’s Always Sunny in Philadelphia is the best TV show and people need to know. Here are my reasons why.

1. Every single character is despicable

Or in other words,

2. The supporting cast is disgusting

If it wasn’t enough already that the main cast is awesome, the supporting cast is equally spectacular. There’s the milk-drinking, robe-clad, incest-loving McPoyle Brothers (a great Halloween costume if ever I’ve heard one), the “street rat” Rickety Cricket (who used to be a priest) and Charlie’s creepy uncle Jack, a man obsessed with his small hands.

“I don’t know how many years on this Earth I got left. I’m gonna get reeeeeal weird with it.”

Whether chasing “delicious nose clams” or crawling out of a sofa oiled-up and naked, Devito’s Frank Reynolds is beautifully repulsive. Most people will have seen him as the crazy dad in Matilda or the pasty villain in Batman Returns, but he’s even more over-the-top here. Every self-respecting person needs Frank Reynolds as their spirit animal.

“The Birds of War,” “I Like Paddy’s Pub,” “Dayman,” “The Nightman Cometh.” For the uninitiated, these are just random words. Fans of the show know these musical numbers as pieces of strange, strange genius. Get on YouTube and check it all out for yourself.

5. The writing is hilarious 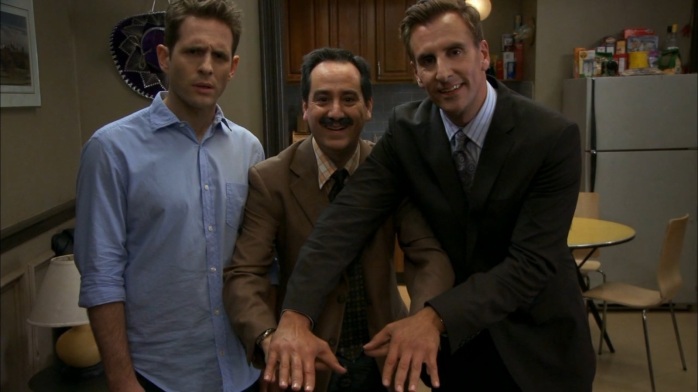 For this point I’m just going to list some of the best lines completely out of context that showcase the show’s crass intelligence:

“Any amount of cheese before a date is too much cheese.”

“Do not plug an open wound with trash.”

“Hi. Um, I’m a recovering crackhead. This is my retarded sister that I take care of. I’d like some welfare please.”

Words to live by.

In fact, there’s the exact damn opposite. The best example? Rickety Cricket. He goes from a successful and healthy priest to absolute rock bottom on the streets of Philadelphia with half his face burned off. Every character on the show gets more selfish, more disgusting and more pathetic over time and it’s just great.

Just read some of the episode titles. “The Gang Gets Racist,” “Underage Drinking: A National Concern,” “The Gang Solves the Gas Crisis,” “Charlie’s Mom Has Cancer,” “Who Pooped the Bed?” Compelling stuff.

If I haven’t demonstrated the value of the show by now, then you don’t deserve it. The show is a veritable mecca for anyone who’s sordid, depraved, cynical, eccentric, disgusting, or just wishes they were. I’ll let you decide which camp you fall into.

Feel free to get in touch Cancel reply